Important Due Date Changes for 2017

Recent legislation has made changes to due dates for some tax and information returns that will be filed for the 2016 and following tax years. These changes will require modifying the timing of the preparation work in many cases.

These forms historically were sent to the recipients by January 31st of each year, and government reporting copies of these forms were transmitted by either February 28th or March 31st , depending on whether they were mailed or electronically filed. For 2016 returns filed in 2017, all copies of the forms must be sent to recipients and filed by January 31st. This change was made to combat identity theft by allowing the IRS to match withholding information when tax returns are filed and reject fraudulent refund claims. The due dates for filing all other information reporting returns remain unchanged. See the table below for specific details:

Partnerships and C Corporations also have new due dates for the 2016 tax year. Starting in 2017, partnership returns will be due 2½ months after year-end (March 15th for calendar year filers) and C Corporations will be due 3½ months after year-end (April 15th for calendar year filers). This switch is intended to put the due dates in a more logical order. Pass-through entities such as S Corporations and partnerships will now be due one month prior to individual and C corporation returns.

See the table below for filing dates for 2016 returns: 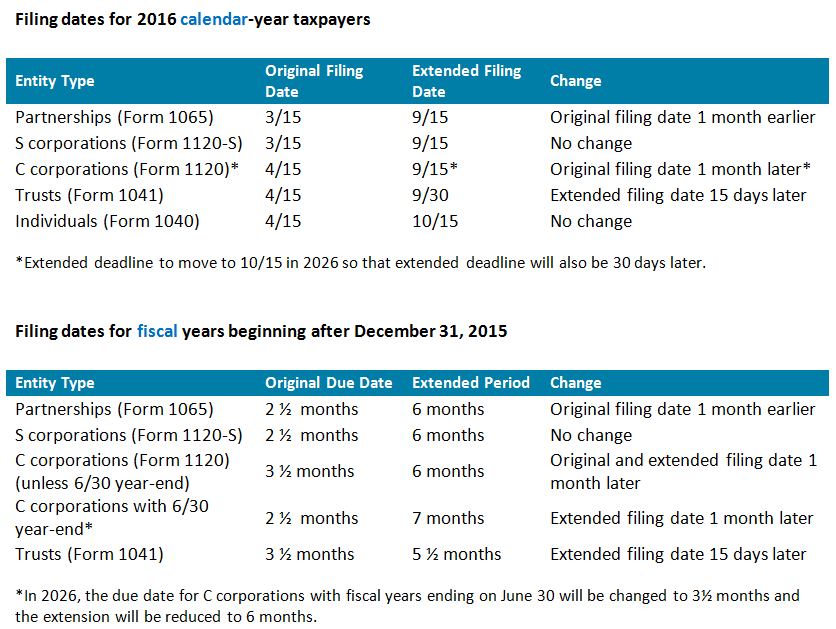 The foreign bank account reporting deadlines will now mirror the individual tax return deadlines more closely. Currently, the reporting deadline for reporting foreign bank accounts on Form FIN Cen 114 is June 30th with no extension available. Under the new regulations, the initial due date will move to April 15th (the individual tax return deadline) with a new extension available until October 15th (the extended individual deadline).