Tax Reform – A Question of When, Not If

The combination of a Republican president and Republican majorities in both the House and Senate significantly increases the prospects for enactment of comprehensive tax reform, including legislation to repeal the Affordable Care Act (commonly known as ObamaCare). Below is a chart comparing the current law to the various proposals. 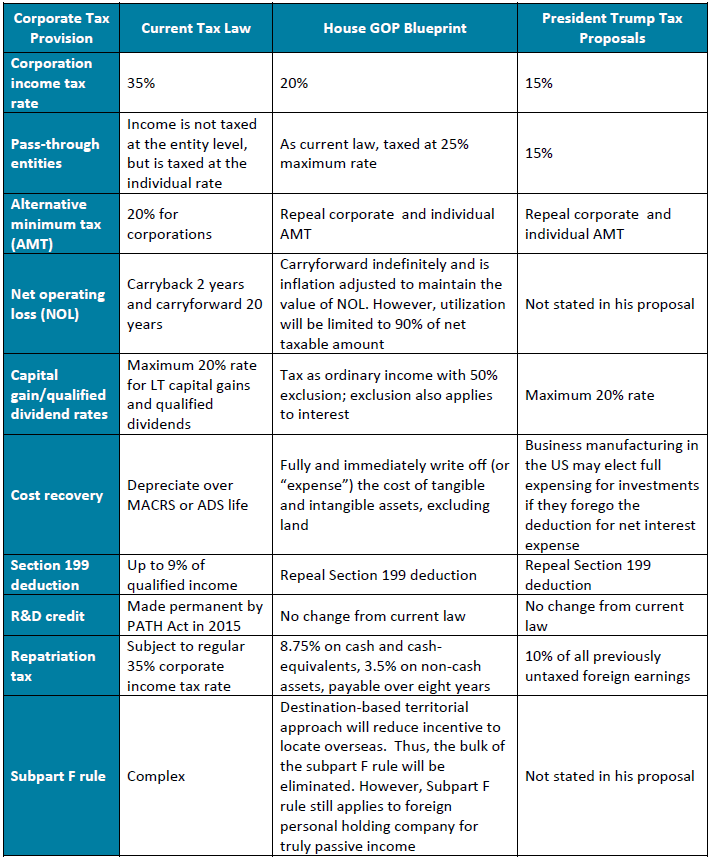 The House GOP Blueprint did not spell out a plan on how to transition from the current system of taxing international income to the proposed destination-based territorial tax system. Also, the Blueprint did not mention an effective date for the tax law change.

The Senate Finance Committee has been working on a corporation integration proposal that would subject business income to a single level of tax. Currently, there is no release date set on the proposal.

If Congress enacts federal tax reform, states will need to consider whether and how to conform to the changes made to the federal law. The states could choose to adopt the federal changes in their entirety, adopt only certain tax provisions and/or phase them in over a period of time, or not adopt them at all. If the new federal tax law results in significant changes to the taxable income calculation, it will be interesting to see how the several states that start with federal taxable income in determining state taxable income react to these changes. No doubt these states are keeping a close eye on the progress of federal legislation given the impact any changes could have on their state tax revenues.